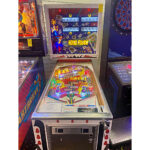 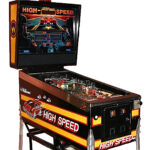 The Transformers Violet Limited Edition “Decepticons” Pinball machine was designed by George Gomez and released by Stern in 2011.

At the heart of this George Gomez designed game is the battle between the two races of robots. The backglass translite image is framed by a border comprised of the two tribes’ colors – violet for the Decepticons on the left and crimson for the Autobots on the right. The cabinet features different artwork on the two side. On the right side are various Autobots with Optimus Prime featured.  The left side features assorted Decepticons led by Megatron. The backbox is similarly themed with the Autobots logo on the right side and the Decepticons logo on the left.  The Decepticons featured are Megatron, Starscream, Shockwave, Blackout and Devastator.  The Autobots are Optimus Prime, Bumblebee, Ironhide,  Mudflap & Skids, and Ratchet.

The playfield design features a wall of ramps, locks and targets. There are eight main shots available from the two flippers. There is a shot to a saucer on the left above the slingshot.  Above that is the left orbit and to the right of that is the left ramp. The orbit and ramp shots are mirrored on the right with a very steep right ramp. Megatron is to the left of center and Optimus Prime is on the right. Also on the right is a captive ball with a yellow Camaro (Bumblebee) behind it which can be hit to push the car into a target at the end of a lane.