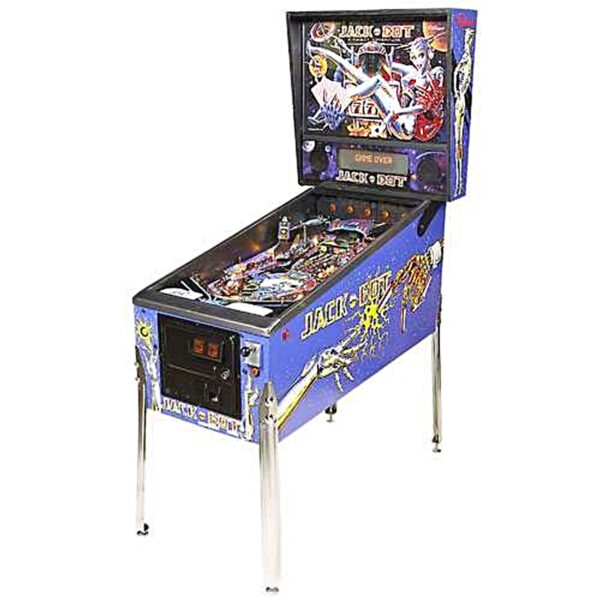 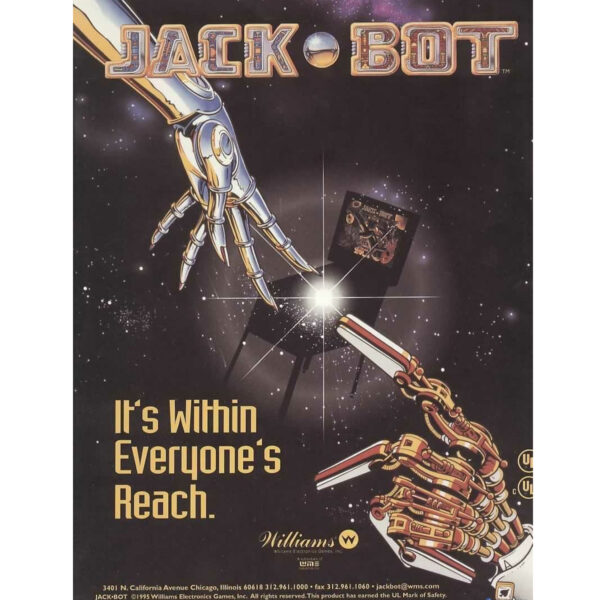 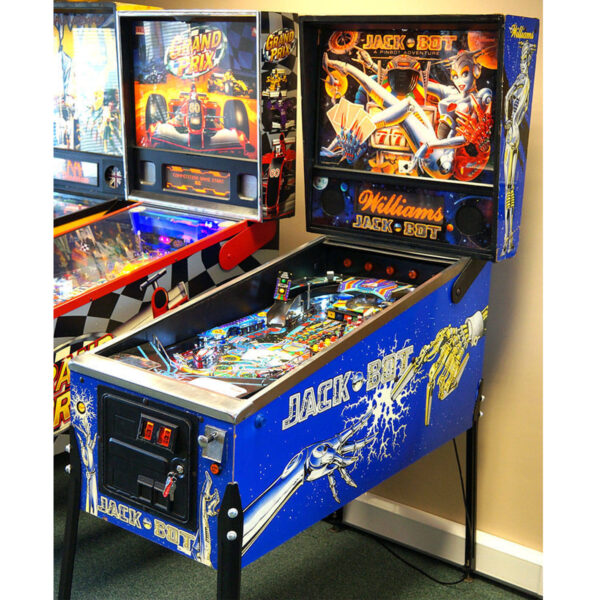 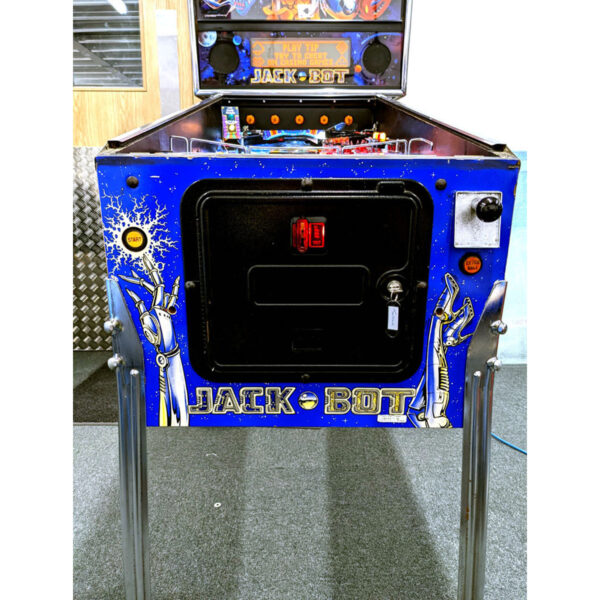 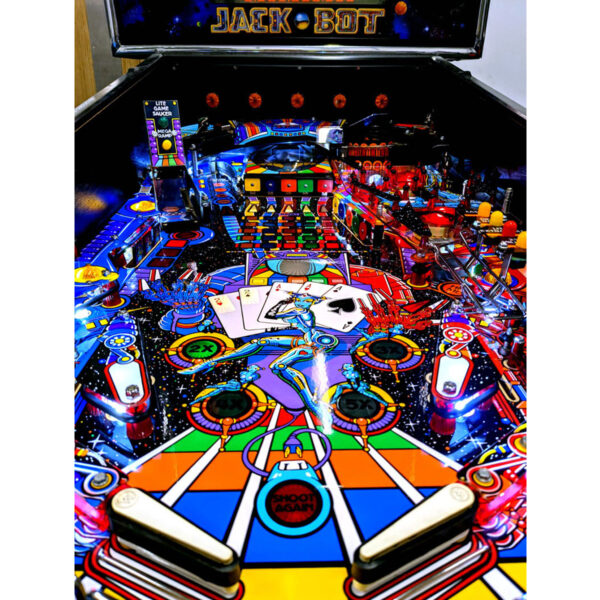 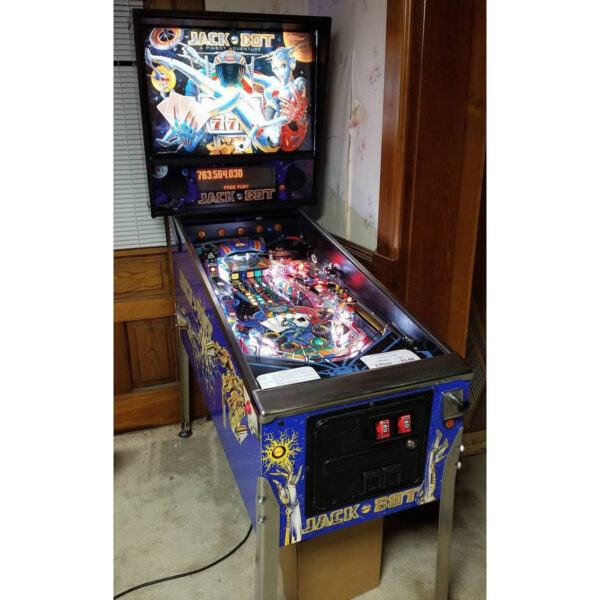 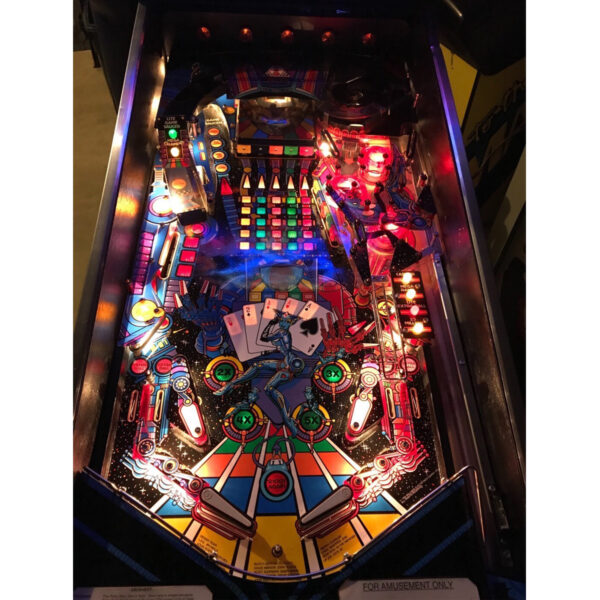 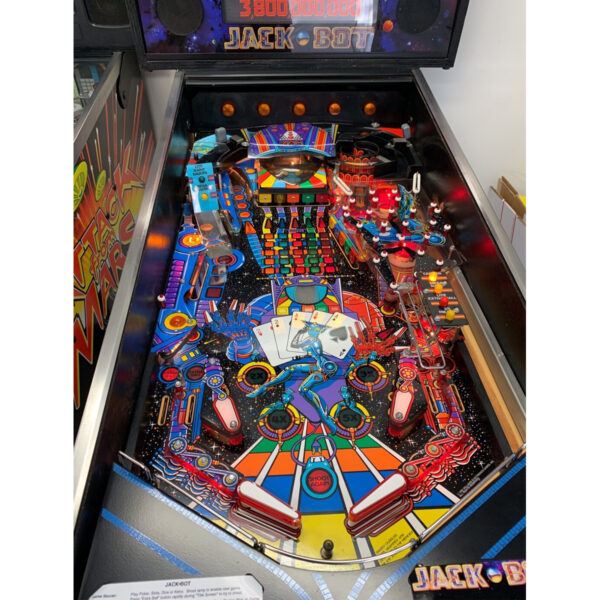 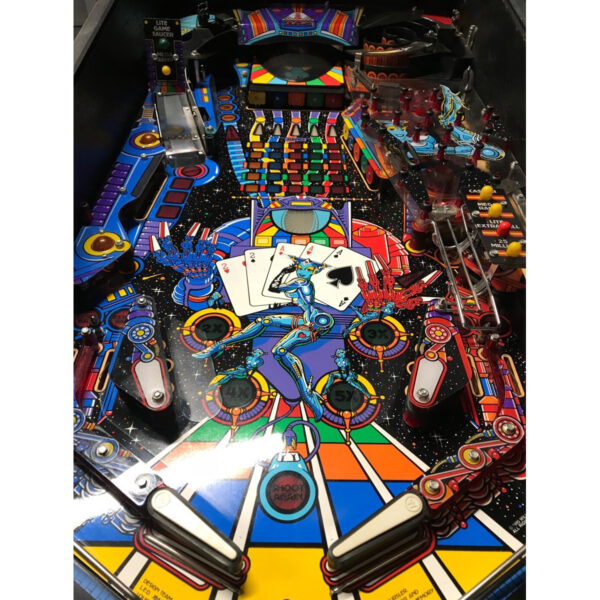 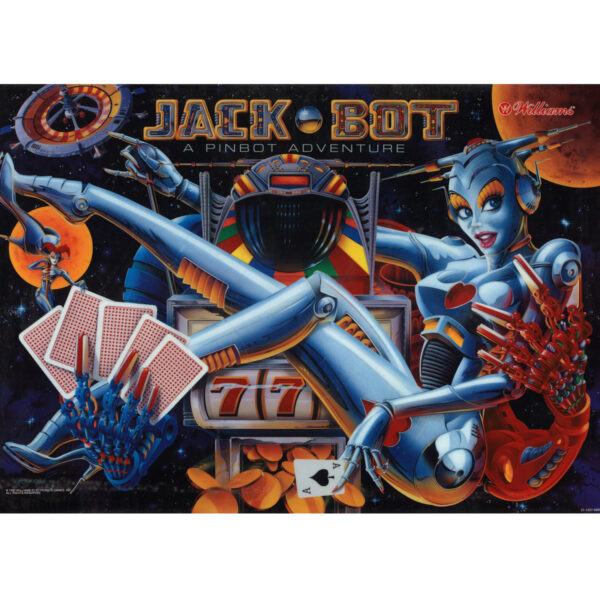 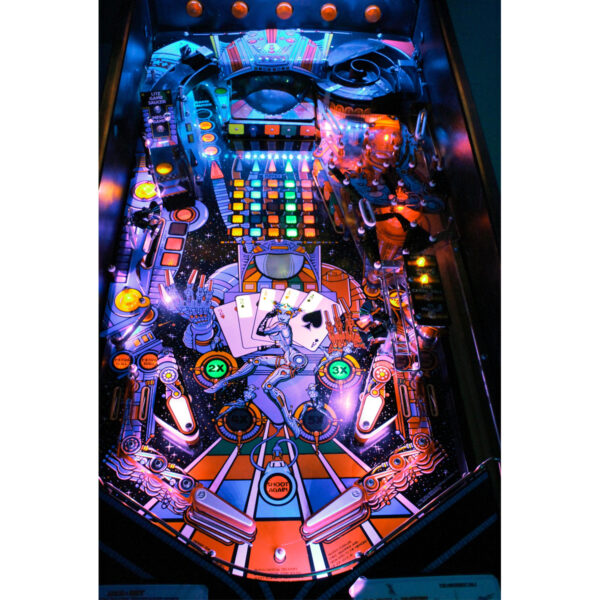 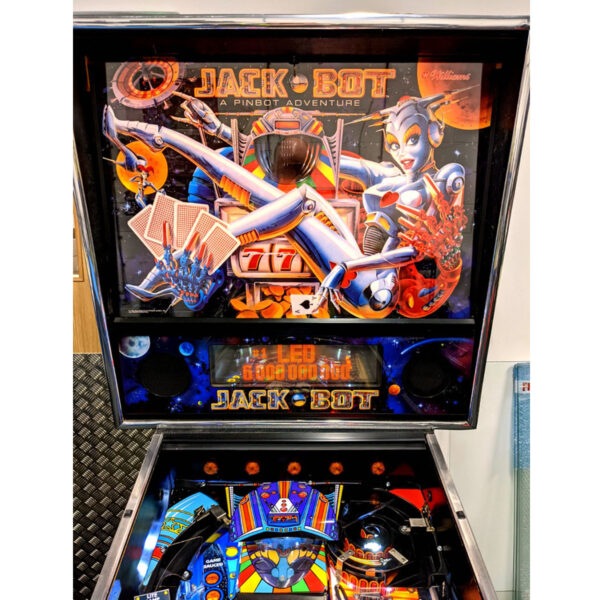 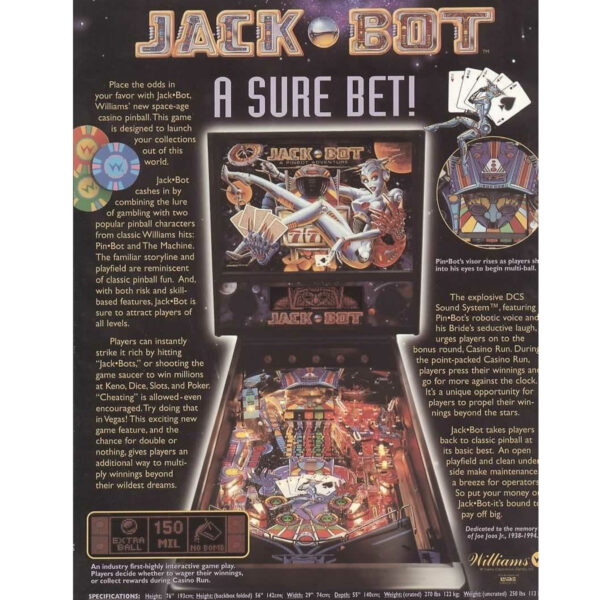 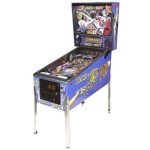 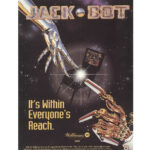 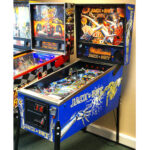 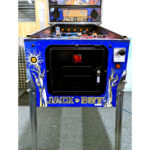 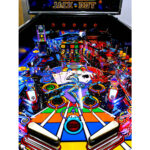 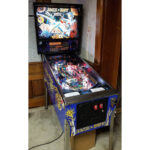 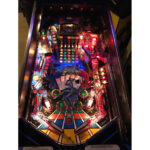 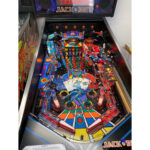 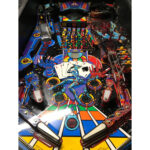 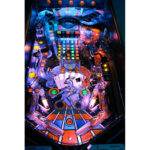 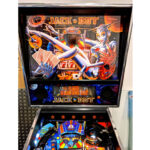 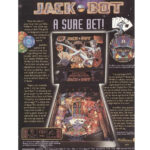 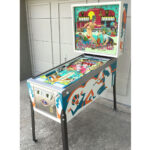 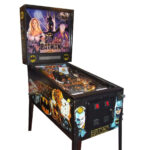 Jack*Bot is a 1995 pinball machine designed by Barry Oursler and Larry DeMar, and released by Williams Electronics. It is the third game in the Pin*Bot series. This game is themed as a futuristic casino. Jack Bot Pinball has two main objectives: to activate Casino Run and to start Multi-Ball; during Multi-Ball, the objective is to score enough Jack*Bots (jackpots) to light Mega Visor.

As in the original Pin-Bot, the plunger launches the ball towards a spiral ramp known as the Vortex, which has a top, middle, and bottom section. To score the highest value offered, shoot the ball into the middle section.

The vortex value resets to 10 million for each ball unless it is held (see below).

Shooting the middle vortex hole during Multi-Ball can score a Jack*Bot.

A touch target just above the right inlane/outlane area. Hitting this target randomly draws a card to add to the player’s total (starting from zero), with the goal being to reach 21 (as in blackjack) or get as close as possible without busting (going over 21). Each time the target is hit, the player scores 1 million points times the total (i.e., bringing the hand to 17 scores 17 million points). Hitting 21 exactly or busting resets the total to zero, but if the player hits 21 exactly, they win a 50 million point bonus.

Aces can count as 1 or 11, as in regular blackjack.

The Hit Me target can also be used to score up to 75 million points during the Hurry-Up Mode, and for scoring Jack*Bots during Multi-Ball.

Underneath the left ramp is a cashier target. When activated, the ramp will lift up to allow the ball to go underneath to hit it. Hitting this target can do a variety of things for the player: score the bonus during Cashier Mode, collect the Solar Jets award, doubles the winnings for a casino game, and collect Jack*Bots during Multi-Ball.

When the ramp is down, shooting the ball up the ramp and over to the mini-bagatelle playfield (a carry-over from the original Pin-Bot) begins the Vortex Counter, which gradually adds 1 million points to the value of the vortex (starting from 10 million), up to a maximum of 50 million points. The ball then will randomly make its way either through the hole, activating Solar Jets Mode, down to the right inlane, which will award a random award (which changes in synchronization with the Vortex Counter), or back to the plunger for another skill shot.

If the ball falls through this hole and into the bumpers, it triggers Solar Jets mode. The ramp flips up; the player then has about 20 seconds (represented by a slow countdown from 10) to hit the Cashier target to score the Solar Jets value, which starts at 40M and goes up by 4M for each bumper hit. Starting Multiball or Casino Run before the timer runs out will also score the Solar Jets award.

If the ball goes through the right inlane, it will trigger one of the following awards:

As in the original Pin-Bot, the machine has a visor that begins the game closed, and a 5×5 grid of lights underneath it, colored yellow, blue, orange, green, and red, in that order. Above the lights are a visor row of targets that light the lights vertically in columns, and to the right side is a side row of lights that light the lights in each row horizontally. To open the visor, the player either needs to complete the grid by hitting the targets in any order, or by shooting the correct visor or side row target when the lights are initially flashing; the lights initially flash one column at a time, left to right, and then one row at a time, top to bottom. In the latter case, opening the visor by shooting the correct target awards a 50 million point bonus (after this is done, however, the machine requires the player to open the visor each subsequent time by just completing all 25 lights on the grid in any order).

In Jack-Bot, the lights are known as Keno Lights, and each column also has a white arrow above it. When the visor is closed, shooting the ball into the target when the white arrow is lit awards a Keno Award:

When the visor opens, the player can lock a ball into one of Pin-Bot’s eye sockets; doing so puts another ball to the plunger, and locking the second ball begins Multi-Ball.

If the visor is open, and the player hasn’t started Multi-Ball yet, completing all 25 lights a second time lights an Extra Ball light above the inlane and outlane roll-overs.

The inlane and outlane roll-overs have an extra ball light above them, which the player collects by getting the ball to roll over the lit inlane or outlane. It is possible to have more than one light lit and collect multiple Extra Balls.

Delivery and Installation (Outside Service Area): $799.99